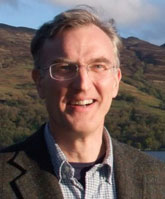 He has given numerous endowed lecture series in the UK and the USA including the Hensley Henson Lectures in the University of Oxford and the Didsbury Lectures in Manchester. Over recent years he has participated in several USA-based research groups, working on such diverse topics as forgiveness and reconciliation, faith and reason, brain-mind issues and the nature of the person. He has just been awarded a £1.6 million grant by the Templeton Foundation with matched funding from the University of St Andrews to establish a major institute in analytic and exegetical theology.

His books and publications are in the fields of Christian thought and philosophical theology and his most recent work concerns issues in Christology and also the relationship between theological anthropology and developments in the neurosciences.

In addition to his academic interests, he is a keen violinist and has played professionally with the Scottish Baroque Ensemble, the BBC Scottish Symphony Orchestra… and Bing Crosby!

Divine Perfection and the Reality of God’s Self-Disclosure: Are Mixed Relations Mixed Up

At the heart of the Christian faith stands the doctrine of the incarnation, the belief that God became human as Jesus Christ - as implied by the New Testament affirmations that Jesus Christ is ‘Immanuel’, the eternal dabar ‘become flesh’, ‘the fullness of the Godhead dwelling bodily’, ‘the one through whom and for whom all things were created’, one entitled to forgive sin and the one in whom God was reconciling the world to himself.

This paper considers what implications the incarnation might or should have for Christian reflection on the divine nature and perfections. Consequently, it will ask first, whether the incarnation should be regarded as more than merely a concrete exemplification of what is known by other means, that is, by means of the Hebrew Bible and/or ‘general revelation’. Second, it will consider how far the doctrine involves a reconstrual of the divine perfections as traditionally conceived by classical theism. Third, it will examine the implications that the incarnation might have for a more general account of theological reference.