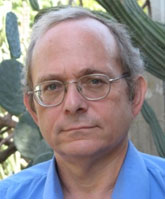 Berel Dov Lerner was born in Washington D.C. and is a member of Kibbutz Sheluhot in Israel’s Beit Shean Valley. He received a BA in Social and Behavioral sciences from Johns Hopkins University, an MA in philosophy from the University of Chicago, and a PhD in Philosophy from Tel Aviv University. He also studied Judaism at Yeshivat HaKibbutz HaDati.   Berel is currently an associate professor of Philosophy at the Western Galilee College in Akko and also teaches at the Interdisciplinary Center Herzliya. He is the author of many articles in philosophy and Jewish studies and of the book Rules, Magic, and Instrumental Reason (Routledge 2002). His current project deals with various aspects of agency in the Hebrew Scriptures, including the relationship between divine plans and human action as well as the roles of temporality and knowledge in human agency. The project involves close readings of much of Genesis, Exodus, and Ruth.

Is God a Stander or a Walker?

Some classical Jewish sources express discomfort with the theological project of understanding God's nature. The one aspect of that project that is universally supported by Jewish sources is the study of God's moral character, equated in in scripture with "knowing the Lord." God's morality is of triple importance for Jewish thought. 1) God makes moral judgments, rewarding the righteous and punishing the wicked. 2) He teaches humankind how to behave. 3) His own moral character serves as a model for human morality via the notion of imitatio dei.

Conventional perfection theology would have it that God is morally perfect, i.e. that He does the single very best thing in every situation. But does it make sense to talk about best-possible ethical decisions? Philosophers have debated whether it makes sense to talk about "the best possible world" or whether that concept is as incoherent as that of "the largest possible integer". Similarly, one might further ask if the notion of perfect goodness (in as much as it involves the choice of best possible actions) makes any sense either. If, as thinkers such as Bernard Williams and Isaiah Berlin would have it, there simply is no systematic moral algorithm for determining the ethically best action for a particular set of circumstances, we may be left having to choose between different courses action each of which can be described as worthy in terms of mutually incommensurable considerations and virtues. While it is frequently possible to rank alternative actions as more or less ethical, there may be no sense to ranking some particular action as the most ethical alternative.

Even supposing that "perfectly good" as discussed above were a coherent concept, could that kind of perfect God serve as a moral exemplar for imperfect humans? Jewish process theologians such as Bradly Shavit Anderson make a strong case against the compatibility of mainstream perfection theology with the biblical and Talmudic canon. I will outline here some elements of a (partially) non-perfectionist theology springing from Jewish sources yet avoiding various shortcomings of full-blown process theology. (Ironically, many process-theologians do seem to assume the reality of best-possible ethical choices!).

I will try to extrapolate a way to think about God's moral character from the way traditional rabbinic texts contrast humans and angels in philosophically interesting ways. For instance: Zachariah 3:7 relates a divine promise made to the High Priest Joshua, I will permit you to move among these [angelic] attendants. This verse has been is read hyper-literally by some rabbis as saying I will give you walkers among these standers. This is understood to juxtapose walkers, the human beings whose lives are a constant process of change, to the angels, who are created in a state of unchanging perfection. The contrast both praises and snubs humanity. On the one hand, humans can change because of their free will, a Godlike attribute which designates them as having been created in the divine image. On the other hand, angelic perfection is often seen as humanity's almost unreachable goal, which was achieved only by Moses and perhaps the Patriarchs.

The human/angel dichotomy plays out the same dialectical moves as does a famous paradox in perfection theology: If God is essentially good, He is incapable of choosing to do evil. But if God is incapable of choosing evil (or even a less than maximal good), He does not choose good freely (at least according to non-compatablists), and thus fails to deserve our praise. Similarly, human beings deserve praise or reward for their good deeds because these are chosen freely, while the angels are good by necessity and deserve nothing for their good actions. The theological question regarding God's goodness can be restated in these rabbinic terms: Is God a stander or a walker?

The rabbis viewed human free will as arising from the internal struggle between a person's good and evil inclinations. Angels lack the evil inclination, leaving them with no possibility of choosing evil and deserving no credit for exerting themselves to choose the good. But could God's free will arise from internal struggles? I think that rabbinic literature creates room for that doctrine. While God does not possess an evil inclination, He does possess reciprocally opposing attributes (or perhaps more precisely, opposing virtues) that are combined in different ways in different circumstances. Sometimes the attribute of mercy has the upper hand, while at other times the attribute of justice wins the day, resulting in quite different consequences. The existence of mutually opposing virtues makes room for alternative possibilities of divine action, just as the struggle between the good and evil inclinations make available alternative possibilities of human action. I am not suggesting that God does evil, but rather pointing to a space for His further development in terms of His living relationship with humans. In one of the Talmud's (Berakhot 7A) most daring aggadot, we read:

It was taught: R. Ishmael b. Elisha says: I once entered into the innermost part [of the Sanctuary] to offer incense and saw Akathriel Jah, the Lord of Hosts, seated upon a high and exalted throne. He said to me: Ishmael, My son, bless Me! l replied: May it be Thy will that Thy mercy may suppress Thy anger and Thy mercy may prevail over Thy other attributes, so that Thou mayest deal with Thy children according to the attribute of mercy and mayest, on their behalf, stop short of the limit of strict justice! And He nodded to me with His head. Here we learn [incidentally] that the blessing of an ordinary man must not be considered lightly in your eyes.

By thinking of God in these terms, He becomes more plausible as a paradigm for human morality. If human morality is all about internal struggle, what help is it to be told about a statically perfect God who lacks an inner dynamic? What sense does it make for us to be told to imitate a restrained and forgiving God if God lacks inclinations in need of restraint? Of course, a completely anthropomorphic account of God's nature must also be avoided. Such an account would fail not only philosophically, but also morally and even politically. Recognition of divine superiority serves as a bulwark against human arrogance and it also underpins critiques of domination of humans by humans by insisting that only an essentially superior God can legitimately be a "Lord" over human beings.

A further element of this line of thought can be based upon the writings of Rabbi Meir Simkha MiDvinsk (1843-1926), one of the leading rabbinic scholars of his generation. He discusses the human/angelic dichotomy in several passages of his erudite and exegetically daring commentary on the Torah, Meshekh Hokhma. Meir Simkha cites rabbinic sources which support the notion that while humans are essentially social and interdependent beings, the angels are independent singulars, each performing its specific task without help from others. Meir Simkha proposes that it is precisely the social nature of human life which affords humans the possibility of growth and change while the angels' asociality condemns them to live at a static level of angelic spiritual perfection. Again harnessing rabbinic texts, Meir Simkha claims that human sociality allows human groups (as groups) to actually surpass angelic levels of spiritual development. Applying this thesis to God, one might suggest that God's relationship with creation in general and human beings in particular does not merely exhibit a pre-existing perfect goodness, but rather it actually has some affect on God's own nature. God's relationships allow Him to be a walker whose nature is not limited to a static perfection, but who rather enjoys the possibility of inexhaustible development. In fact, Creation itself may be understood as God's means of providing himself with the relational others necessary for His own further development. This claim can best be understood in terms of a kind of revised version of the Process doctrine of dipolarity. In His transcendent aspect, God does possess an absolute and therefore unchanging nature. However, in His imminent aspect as a party to covenantal relationships God can develop in response to the presence of an Other. None of this leaves God inferior to angels, since there is no reason to think that a perfect angel would be a very good god. I will conclude by citing Harry Frankfurt's paper "On God's Creation" as an illustration of one way such a theology could be developed.