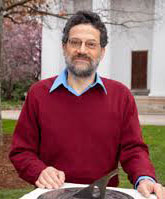 Edward Halper is Distinguished Research Professor and Josiah Meigs Professor of Philosophy at the University of Georgia.  He earned a PhD in philosophy from the University of Toronto, where he worked under Father Joseph Owens at the Pontifical Institute of Mediaeval Studies.  Much of his published work is in ancient philosophy, especially on Aristotle.  Two of his books are on the problem of the one and many in the Metaphysics and he is working on the third, final volume of the series.  He has also published a number of articles on Hegel and other philosophers.  Metaphysics, in general, has been a long standing research area.  Jewish philosophy is a relatively recent interest.  He has written on the role of Jewish law in the formation of character, and he has an article coming out on divine justice and human suffering.

Maimonides speaks strongly against anger (esp. in Eight Chapters). Although he thinks passions should be experienced in the mean, he finds few if any circumstances in which genuine anger is justified. It is a surprise, then, that the Torah includes anger among the divine attributes: God is “slow to anger” (Ex. 34:6) and his anger lasts only for an instant (Ps. 30:6). What is Divine anger? Is it confined to idolatry (as Maimonides claims, Guide 1.36). Can God be perfect if He gets angry? Further, why is it appropriate for God to get angry, but not man? If anger makes a man imperfect, why does it not make God imperfect (cf. Guide 1.26)? This paper argues, first, that the Torah’s approach to anger depends on who it is who gets angry and for what reason. What is imperfect for us is, I propose, a perfection for God. Second, the paper explains how the Torah can attribute anger to God without undermining other perfections, like His being unchanging. Third, taking off from the case of anger, the paper explores the notion of perfection in a divine being. Whereas philosophers (including Maimonides) have understood perfection as completeness and self-sufficiency, the attributes that the Torah ascribes to God should be understood in terms of caring and, in general, his relation to his creation.