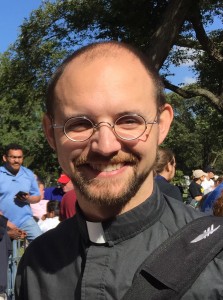 Currently a graduate student at The Catholic University of America, Washington, DC, Eric is pursuing a Ph.D. in Biblical Studies with a focus on Hebrew Bible. As the son of a carpenter and nurse both of whom are devoutly Roman Catholic, Eric has a longstanding interest in constructions of space, healing and religious expression. After completing a BA in Architecture from Washington University in St. Louis (St. Louis, MO, USA) in 2005, he undertook theological studies and earned a dual degree MDiv/MA from Aquinas Institute of Theology (St. Louis, MO, USA) in 2010. Upon completing theological studies, Eric was ordained a Roman Catholic Priest (2010) and served for two years in parish ministry while continuing studies to develop greater competence in ancient and modern languages for research purposes. Eric maintains broad learning interests. His recent research has been colored by questions of space and spatiality informed by his early study of Architecture. He has sought to integrate his interests in space and spatiality with theology by focusing on spatial construals of divine corporeality and divine domains in the Hebrew Bible as well as in Ancient Near Eastern Iconography and literature and Christian Scripture. His attention to questions of divine space and spatiality find Eric increasingly exploring their theological and anthropological implications. Most recently he has been exploring the role that spatial construals of God in the Bible play in revealing (and concealing) divine attributes (i.e. omnipotence, omniscience, omnipresence, etc.).