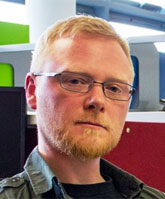 Michael T Miller completed his PhD in Jewish Studies at the University of Nottingham in 2014, working under Agata Bielik-Robson. His research focusses on Jewish thought from the Second Temple Period to the medieval Kabbalah, as well as modern Jewish philosophy. His monograph, The Name of God in Jewish Thought (forthcoming 2015, Routledge) offers a philosophical examination of Jewish mystical traditions regarding the relationship of naming to identity, incorporating apocalyptic, rabbinic, and kabbalistic texts. His other academic interests include Black Judaism, and contemporary continental philosophy.

God's Perfection and His Name

The Name-Theology is a central aspect of Jewish religion throughout its history, from the Biblical text where the Name dwells in the Temple to the Kabbalah's accounts of the Name as the fount of all existence. This paper will argue that through the philosophical investigation of this tradition, we can find a new way of thinking the question of God's perfection.

While the Name YHWH is believed to come from the root HYH, ‘to be,’ (likely meaning something like 'He is'), the idea of a static being of God, outside space and time, unchanging and perfect, is ultimately of Greek not Hebrew origin. As Thorlief Boman has argued, the Hebrew language can be contrasted to Greek precisely in its dynamism, its emphasis on movement and change in time rather than staticity and spatiality. Hebrew is a language of action and relation. This different metaphysics requires some unpacking and extrapolation in order to find its implications for theology (a term which already admits a Greek bias, as Harold Bloom has noted). Tryggve Mettinger posits that we may find reason to amend “He is” to “He is [here and is now helping],” with its implication of personal presence – a conclusion shared with Rosenzweig that the most important aspect is “the resonating 'with you'”.

I will argue that we find the fluidity and relation-dependent nature of God expressed by the unique nominal-theology of Jewish religion, as expressed not just in the Bible but also in the Talmud and mystical literature which draws on these. As these ideas are developed in the Kabbalah, we find a gradual dislocation as the influence of Neoplatonism waxes, such that the core is something of an immutable, 'philosophical' God, and the Name YHWH indicates the manifest potency of a personal God who can be worshipped and relates to human beings. Through the further analysis of later traditions, incorporating the philosophical tools and concepts provided by modern Jewish philosophers such as Levinas, Husserl, and Rosenzweig, we find that Jewish tradition holds God ultimately in-relation to human beings; as suggested by the third person construction of the Name YHWH; while there is still an apparent internal aspect, which we may consider the first-person construction of God's Ehyeh, this is ultimately not to be understood as the static perfection of Greek philosophy, but retained as the dark ground of an unknowable internality; the simple a=a of Rosenzweig's theology. Ergo, it will be apparent that much of this theological development is contained in nuce in Moses' revelation of Exod.3:14, God naming Himself Ehyeh, which Moses conjugates into YHWH.

The philosophy of the Name posits the Name as a phenomenal encounter: the Name is that aspect of God which emerges into the human world; the Name, then, is the shape that God’s essence takes for finite human subjectivity. But that there is an essence yet other than this, a “hidden” aspect of God which is God in His ipseity, means that while the Name presents God for human beings, it also serves to conceal that which cannot be known.

And what is the nature of this noumenal, hidden aspect of God? Through the use of modern philosophers I will argue that it is precisely the emptiness which we find when we attempt to analyse the concept. Husserl's argument that seeking beyond the surface appearance is useless, preferring to leave that realm completely unknown – as “The secret things belong to the LORD our God, but the things revealed belong to us and to our children forever,” (Deut.29:29) and Hagiga 2:1's ban on certain kinds of knowledge.

This anti-metaphysical reading, then, brings God into the world while maintaining that He transcends it. While there is still that “unincludable” nature of which Levinas speaks, the action of God, visible via the Name, is here immanent in our world. We can talk of the latter, fit it into finite human language, but this very immanence conceals a transcendent aspect.

One aspect of this concealing role is that the Name then cannot define God; that is, it cannot be a semantic equivalent for the nature of God, or a statement of His essence. To be so, would be to make God contained within the world. As such, the Name forms not only the beginning point of language, but also the limit of language. Names refer to what language cannot describe. And while the creative function of language enshrined in countless Jewish texts does allow for an accurate linguistic description of reality, a linguistic equivalence with the world, this description is limited to only what can be broken into its constituent semantic elements; that which cannot be totalised cannot be described but only referenced.

The Name is not a being however; it is rather a mode of being. It is through the Name that God interacts with creation; this action, while positing an essence behind it, is still itself the presence of that essence as an event. The Name posits an essence; but apart from the Name, there is no such essence, and in looking behind the Name we find nothing. There is nothing to be found (but, to paraphrase Rosenzweig, this nothing is still a nothing of God). This paradoxical absence-in-presence then delineates the most we can say about God, and His perfection: nothing.