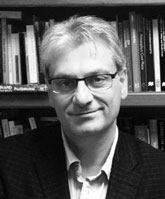 Randy Ramal is an Assistant Professor of Theories and Philosophy of Religion at Claremont Graduate University. He has an interdisciplinary background in Religion, Philosophy, and Literature, and has previously taught at Pitzer College, Claremont School of Theology, and the University of La Verne. His main teaching and research interests center on the philosophy of Wittgenstein and on logical issues related to ethics, philosophy of religion, pragmatism, Whitehead, and non-human animals. His latest publications include “Religious Concepts and Absolute Conceptions of the World” (International Journal for Philosophy of Religion, 2015), “Beyond Philosophy: David Foster Wallace on Literature, Wittgenstein, and the Danger of Theorizing” (In Gesturing towards Reality: David Foster Wallace and Philosophy, eds. Scott Corb and Robert Bolger [Bloomsbury 2014, 177-198]), and an edited volume entitled Metaphysics, Analysis, and the Grammar of God: Process and Analytic Voices in Dialogue (Mohr Siebeck, 2010).

The Problem of Subliming God's Existence

In his Philosophical Investigations, Wittgenstein draws significant attention to the tendency among many philosophers to sublime the logic of our ordinary concepts. What he meant is that philosophers often take concepts out of their original contexts of application and situate them in new contexts where they become not only irrelevant but also distorting of the meanings of these concepts.[1] For example, some of the Presocratic philosophers turned the words ‘reality’ and ‘being’ into metaphysical concepts that barely held any genuine connection to the ordinary language of ‘what is real’ and of ‘being’ in the world.

In religion, Wittgenstein states, some philosophers treat religious “pictures” of God (in religious stories, psalms, prophecies, even paintings such as Michaelangelo’s “Creation of Adam”) as they would pictures of human beings. For him, this mixing up of different contexts of application is a case of subliming what it means to speak of religious pictures and, by implication, of the reality of God. In the case of human beings, one could point to the human beings pictured without the pictures themselves, but this is not the case with pictures of God because the latter are religious and spiritual pictures, not factual.[2] For Wittgenstein, religious pictures have a regulative rather than an explanatory role in the lives of believers: they shape life in such a way that believers who speak of God as creator and judge, to give one example, see their lives as owed to and judged by that God. Thus, God’s reality would be sublimed if imposed upon by a factual context.

In this paper, I want to argue that the logic of God’s perfection has been partially sublimed by some philosophers along the lines suggested by Wittgenstein, but that there is also another form of subliming that is equally problematic. The problematic move described by Wittgenstein pertains to transposing legitimate religious notions into confused metaphysical notions that distort their legitimate meaning. In the case of God’s perfection, many classical and other contemporary theists speak of God’s perfection as if it were an attribute of a metaphysical being called ‘God’ – e.g., Anselm, Aquinas, evidential theists such as Richard Swinburne, and Reformed epistemologists such as Alvin Plantinga. Instead of looking to see how the concept of ‘perfection’ makes itself present in biblical language, even if there are no exact words corresponding to the English concept of ‘perfection’, these philosophers baptize the word ‘perfection’ to mean an attribute of some sort, something that God “possesses,” rather than something definitional of God and without which we would not be able to know what God is.

I want to argue that the God and perfection sublimed are not the ones found in the monotheistic scriptures. In the paper I discuss St. Anselm’s ontological argument for God’s existence as one example of this type of philosophical confusion, and I show that even careful and recent well-known discussants of this argument (such as Norman Malcolm and Charles Hartshorne) fail to allow the language of God’s perfection to speak for itself.[3]

Another philosophical move equally problematic in discussions of God’s existence, and by implication of God’s perfection, is found in the denial of the relevance and applicability of grammatical (philosophical) concepts to the biblical context. For example, whereas many philosophers of religion insist that the Bible contains a concept of creation ex nihilo, most biblical scholars deny this reference and speak of creation out of pre-existent matter or a chaos of some sort. Taken at face value, the insistence on the presence of a doctrine of creation ex nihilo in the Bible is an example of imposing a philosophico-theological meaning on the religious sense of creation, which might lead some philosophers to side with the biblical scholars against their philosophical colleagues. But this might be a hurried move since the biblical scholars who reject the idea of creation ex nihilo still affirm a different doctrine of creation – out of something, whatever that thing is. I want to argue that the idea of situating the concept of ‘creation’, and by implication ‘perfection’, in a theoretical framework, particularly an explanatory framework, is itself the problem. Is it not possible at all to read ‘creation ex nihilo’ as a grammatical, or logical, concept that clarifies something about the idea of God as creator – e.g., as an expression of seeing the world as a miracle of existence?

My point is not to deny the viewpoint of biblical scholars offhandedly but to show the need to be open to further possibilities of interpretation that might be descriptive of something present in the Bible, albeit not always with direct equivalence of terminology. What, then, about the concept of God’s perfection? Is it found in the Bible?

Obviously, serious work needs to be undertaken in order to unravel what it means to speak of God’s perfection in the monotheistic Scriptures. I contend, however, that if those who deny the biblical presence of the concept of God’s perfection discuss it solely in the context of notions of power, knowledge, goodness, and necessity that are taken to be attributes of a God who happens to own these notions, and/or, alternately, only in the context of the inability of the human mind to grasp something supposedly beyond its experiential and cognitive powers, then here, too, we would have a case of subliming the discourse of God’s perfection. I think this becomes clear from a careful reading of Ludwig Feuerbach’s lectures on the essence of religion and the essence of Christianity. On the surface, Feuerbach might not seem to be denying that the idea of God’s perfection is found in the Bible or that God’s reality and/or perfection is beyond human comprehension. Still, since he traces the entirety of religion to a physico-emotional and affective dependence on the natural world[4], he inevitably ends up denying that God’s perfection has a natural context in the Bible. I want to show that although he thinks he allows religious discourse to speak for itself, his naturalistic presupposition does not really allow for that.

My argument, then, is that philosophers who discuss God’s perfection by either dislocating it from its naturally religious uses or denying it the relevance of any philosophical clarification forget that the religious forms of life in which people operate are the natural and pragmatic contexts in which the discourse of religion has its life and applications. It is to these contexts that we need to look if we are to understand what is meant by God’s perfection. I want to show that paying attention to Wittgenstein’s method of investigation could help in that direction because this method has a constructive role in recovering meaning for religious concepts that have been violated on philosophical grounds. We could also avoid subliming the logic of the concept of God’s perfection when we remain open to possibilities of meaning that could come from philosophical accounts of perfection.