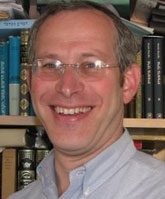 Zvi Grumet is Director of Educational Projects at The Lookstein Center for Jewish Education (Bar-Ilan University). In addition, he directs the Bible department at Yeshivat Eretz Hatzvi and teaches at Pardes. He is also on the faculty at Hebrew College and Michlalah Jerusalem. His research interests include educational leadership as well as literary readings of the Bible and the intersection between Bible and philosophy. Zvi earned his Rabbinical ordination and his Ed.D. at Yeshiva University. His most recent book is Moses and the Path to Leadership (Urim, 2014) and his new book, From Creation to Covenant, will be published in 2016 by Toby Press.

This paper explores the image of God as presented primarily in the creation narrative in Genesis 1-3. It will argue that while the God of creation may be omnipotent, the creation of humans presents a challenge to God’s omniscience, and it may be precisely that challenge which motivates the entire creation. The paper will focus on a close reading of the Biblical creation narrative and will introduce limited midrashic commentaries which support the reading.

Contrasting the Biblical creation narrative with other ancient creation myths highlights that the Biblical creation is organized, planned, and directed by a single creative force. Elohim, literally, the All-Mighty, is the creator of all, even the legendary sea-monsters. As such, God as the All-powerful is deeply rooted in the text. There are no other forces; and the creation progresses both sequentially and cyclically, demonstrating beyond question that Elohim’s authority is unquestioned.

There is, however, a faint – albeit noticeable – hesitation prior to the creation of humans. This is due to the nature of humans, created in God’s “image” – the nature of which is subject to considerable debate. Yet it is precisely because humans are to be in God’s “image” that their very existence requires that God ceded some of His authority to them. This is not only hinted to in the text but made explicit in many midrashic comments. This paper suggests that it is not only Divine control which is ceded but even Divine foreknowledge, as humans who are truly capable of expressing their Divine “image” and acting upon it necessitate that God’s foreknowledge be curtailed. As such, the decision to create humans in the fashion that they were created was accompanied by a Divine “contraction” of both influence and knowledge, a contraction necessitated by creating humans as they were.

This theme is first presented in the creation narrative in Genesis 1, but explicated further in Genesis 2-3 which is an exploration of human nature more than it is a competing creation narrative. In this narrative it is God who creates the conditions for his experiment – one which fails repeatedly until He changes some of the relevant factors. Understanding the nature of humans goes hand-in-hand with exploring the nature of God. The repeated experimental failures reinforce the implication that God’s knowledge, at least of humans, is limited, and that an essential component of the Biblical story is the story of God learning about humans as they learn about God.